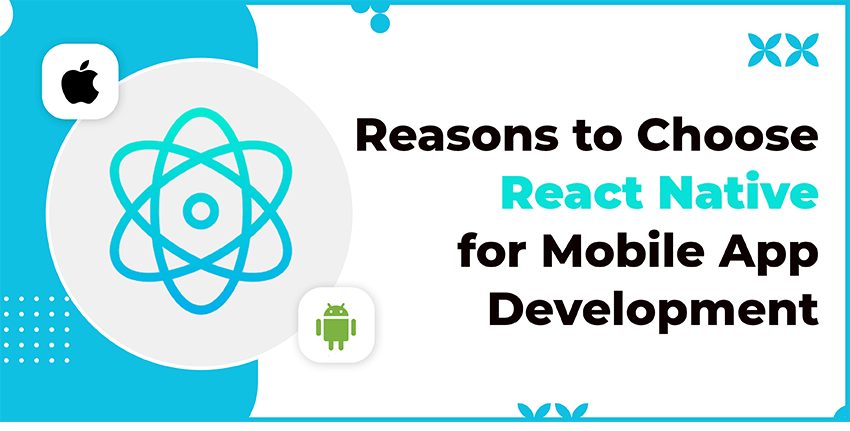 With the expansion of mobile apps especially in the last decade at a very high rate, the demand and manipulation of cross-platform application development have increased simultaneously. Out of all the leading cross-platform app development frameworks, React Native has a stellar position of its own. Due to its slick, smooth, and responsive user interface, it becomes the best faster, and cheaper apps framework by providing the best quality and functionality among other natives.

What is React Native?

As we all know, React Native is a Java open-source JavaScript framework, that designed for building apps on various platforms like iOS, Android, Windows, and other web applications. It combines the most effective elements of native development with React, a best-in-class JavaScript library for building user interfaces. React Native framework create truly native apps without compromising the user’s experiences. This framework provides a core set of platform of agnostic native components that map directly to the platform’s native UI building blocks. With the facility of JavaScript, React Native allows you to repeat at lightning speed.  It reduces the waiting time for native builds to finish. Save, see, repeat at the same place.

Some of React Native’s Key Points are:-

2. React Native helps to build apps faster or in a minimum amount of time. Due to its responsiveness and providing and good user experience, these apps become faster and frisky.

3.  Due to its brilliant feature of usage of JavaScript in react native framework, the web developers don’t require to learn complex languages such as Objective-C, Java, etc. for making an app.

4.  The JavaScript components are used in a very high manner to build both iOS and Android apps components. Also, it saves a lot of time for a developer to create the same app for multiple platforms.  React Native is one single codebase for Android, iOS, and Windows apps.

React Native platform is a great development platform for building mobile apps. Due to its functionality, it provides a slick, smooth, and responsive user interface with a lower loading time. Due to its low development and maintenance costs, this framework is growing faster and cheaper to build apps in React Native as opposed to building native ones, without compromising on the quality and functionality. It is a fast-growing technique to build a responsive app, nowadays. Pray, Varmala, Open Bazar, Terara are the popular apps built with React Native Framework.

The main aspect of the React Native framework is to execute the entire project in a short period of time. The apps made in the React Native framework come with a faster loading speed, it’s all because of the absence of heavy components that might be adversely affect the speed. Moreover, React Native’s hot reloading feature accelerates the fast-tracking process enabling app developers to detect changes in the real-time application without reading the full development code. For these reasons, the app performance speeds up to a great extent.

Due to this feature of React Native’s third-party integration capability, the developers don’t need to entirely depend on the web view for particular functions. For example, want to integrate Google Maps into your app, the React Native environment enables linking the plugin with a particular module in the framework. Then the particular map feature can be connected with certain functionalities of the mobile device such as move, rotate, zoom, etc. and this periphery can be maintained at a single place, so that the app uses less device memory and loads faster.

The apps which build on React Native framework don’t require a lot of resources or large teams for completion the project on time. Business Entrepreneurs require a small number of team members comprising of a project manager, a technical lead, a business analyst, 1/2 UI/UX designers, one developer, and one QA specialist to build an app React Native Framework. This is indeed a huge business benefit for the firms.

React Native becomes the best tool for developing the best app for both iOS and Android. In this framework, it can reduce the codebase by about 95% saving you time, money, and energy.  The react native apps are very easy and reliable to write, saving time for developers or completing the project in just half of the usual development time. On top of that, React Native has several open-source libraries of pre-built components which can help you further speed up the development process to build apps.

React Native is an open-source framework that makes several components readily available to app developers. The applications built on React Native framework can be used and maintained across multiple platforms which makes it quite flexible to deploy. The same code is applicable for deploying the application on both iOS and Android platforms. Additionally, the usage of Redux, an innovative management tool helps to shorten the development time further. The app development community doesn’t need to learn other programming languages to make a responsive native app. These react-native performs like native applications and leverages graphics processing units, which speeds up the applications.

As we all know, React Native is an open-source framework that enables react app developers to access all the relevant documentation without any cost. Also, this framework offers numerous information on development, beneficial resources, etc to assist developers. This is also one of the biggest reasons to choose React Native Platforms for developers to guide newbies through forum discussions. The developers can even review the code in between or ongoing projects for everyone to give their productive feedback to clients. Overall, it provides outstanding and cooperative expertise for the community of developers.

The React APIs’ orientation is mostly cross-platform, which means you just need to write one React Native component, and it will work seamlessly on both iOS and Android platforms.  The file extensions offered by React Native support modules as well as platforms and the file extension is platform-specific, developers can easily define specific files meant for executing particular functions. The applications built on React Native platforms can be used and maintained across multiple platforms which makes it quite flexible and reliable. This feature of “being flexible”makes it convenient for react developers to easily update and upgrade the mobile applications.

React Native Mobile App Development is a top pick amongst app creators and the kind of app creation projects that are best suited for this framework. It is a   community-driven framework with ample support. A large number of native experts share their knowledge and expertise. It gives fast and the best performance on mobile. If you are planning to craft a customized React Native framework apps, feel free to contact Algoseed Labs, a prominent offshore top software development company in Montreal offering high-end React Native app development services all over the world.